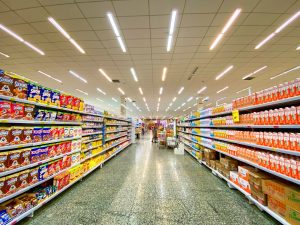 Photo by Nathália Rosa on Unsplash

I’m old enough to remember the first supermarket, Fine Fare, arriving in my hometown, Swindon. I guess it was sometime in the 1950s. And I remember prior to that my mother queuing in the grocery store for a counter assistant who would go and get whatever was on the shopping list (as long as we had sufficient ration coupons). Of course supermarkets totally changed the world of shops and as importantly the work of the employees.

Fast forward to the 1990s. I won a bet (for three beers) with my colleague Professor Gerald Heidegger who assured me that bar codes would never be accepted in German supermarkets by other staff or customers (he also predicted the failure of the new extended opeing hours for supermarkets that has previously had to close at 1230 on Saturdays).

All this is a prelude to predictions for the latest revolution in shopping, discussed in an article, ‘Do smart supermarkets herald the end of shopping as we know it?’, by Rupert Neate in yesterdays Observer newspaper. The article reports on how the major supermarket chains in the UK – and significantly also Amazon – are trialing cashless shops. Entry will be through a dedicated app, and with the use of hundreds of sensors and cameras and an AI based software platform, shopper will be charged through their credit card and receive a receipt on their mobile phone on exiting the store.

The new systems are claimed to be a response to shoppers dislike of queuing although more likely they are an attempt to reduce costs both by reducing shoplifting (which is said to be rampant with new self checkout systems) and through cutting the numbers of shop workers employed. “While fitting out supermarkets with the new technology costs about £1m-per-store, the firms installing it claim it will pay for itself within 18 months because it will hopefully eliminate theft.”

The Observer draws attention to the danger of exclusion for those lacking a smartphone. Emmanuelle Andrews, policy and campaigns officer at human rights group Liberty is quoted as saying: “Shopping should be one of the great levellers, where the businessman in the sharp suit is shoulder-to-shoulder with the pensioner on benefits. Everyone has to buy food, but with this technology only those with a smartphone and credit cards will be able to shop there.”

But if the new system catches on the big impact will be on jobs. “The checkout-free technology is specifically designed to eliminate jobs, and save money,” the artcile quotes Dr Carl Benedikt Frey, an Oxford University economist and expert on automation. “Frey fears that a national rollout of AI stores would send the checkout worker the same way as the elevator operator, which as of today is the only one of 270 job descriptions listed in the 1950 US census to be completely eliminated by automation.”  AI is a threat to the jobs of 270,000 checkout workers in the UK, most of whom are women. The Office for National Statistics (ONS) has identified supermarket cashier jobs as among the most at risk of being replaced by automation, with 65% of checkout-operator jobs said to be at risk. And overall, The ONS analysis shows that 70.2% of the roles at high risk of automation are currently held by women.